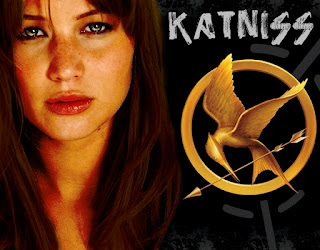 "The book was better."

I'd say this is true for 95% of movies that are based on books, with 4% having the book and the movie equally good and 1% of movies that are better. (I'm a word person and don't play well with numbers, so don't hold me to those percentages. Hey, at least they add up to 100!)

So it was no real surprise that the theatrical version of THE HUNGER GAMES fell into the 95% category, yet I still found myself quite disappointed that this movie I had anticipated seeing on the big screen more than any other didn't quite live up to my expectations. Don't get me wrong--it's a good movie full of excitement, visual thrills and moving scenes. I'm sure anyone who sees it that hasn't read the books will think it's fabulous. It was just missing the deep, soul-stirring elements that make me love the book series so much.

It certainly wasn't the fault of the cast. While some of the actors were not how I pictured the characters, they all did a great job of bringing their roles to life and won me over. Especially Jennifer Lawrence as Katniss and Josh Hutcherson as Peeta. Their scenes together were magical--both the action-filled and the emotional ones.

No, I think the biggest problem was the inherent limitations of watching a movie versus reading a book, especially a book written in the first person POV. While Jennifer Lawrence did a wonderful job of showing Katniss's amazing bravery, devotion to her family and strength of character, even her award-worthy acting skills could not portray Katniss's inner conflicts, subtle revelations about herself and her fellow tributes, and her ingenious ability to control her outward appearances and reactions because she knew she was always being watched by the entire country.

Not only did Katniss have to manipulate the spoiled Capitol citizens whose sponsorship she needed to survive, she had to be constantly mindful that her sister and mother were being forced to watch everything that happened to her. You really can't show this through facial expressions, and it's not something Katniss would talk about with anyone even if she could do so without being overheard. So it's a major part of the story's draw that is missing from the movie.

There were other important aspects of the story that I think the director didn't do justice to or omitted altogether. This was probably because of time limitations, but I think some of the special effect scenes and visual gut-punches could have been shortened in order to show things like how desperate Katniss was to find water when she first went into the arena and how she almost died of dehydration. She finds a water source immediately in the movie and never even gets thirsty! The same thing is true of the pain she and Peeta suffered from their injuries and how close they came to dying, and also the emotional bonding between them that developed gradually while they cared for each other. These things were skipped in exchange for more death scenes, and it kept the movie audience from connecting as much to Katniss and Peeta as readers do in the books.

For me, the biggest thing about both these books and the movie is the magnificence of the heroine. Katniss is both bigger than life and completely human at the same time, and I cheered for her not only because of what she meant to the story, but for what she meant to the millions of young girls reading about her. Her message is this:

You are capable of making a difference in the world every bit as much as any of your male counterparts, and don't ever let anybody convince you otherwise!

And while the heroines in my books don't inspire any revolutions like Katniss does, they do share her belief in herself and always stand up for themselves against adversity. If they inspire even a fraction of Katniss's fans, I'll feel as if I've made a difference as a writer.

~Stay true to yourself and your dreams will come true.
Posted by The Belle in Blue at 8:44 PM No comments:

I got tagged by my critique group partner and fellow author Stephanie Lawton. As tagging memes go, this one isn't bad at all. Who doesn't like to share snippets of their books with readers to torture--er, I mean tease them and make them want to read it? This girl right here does for sure!

So here's mine from my current WIP, Shades of Blue. It's a coming-of-age story about a young couple who have to grow up a lot faster than they expected. I'm also including the photo I was lucky enough to find that is the embodiment of Sam and JoJo.

Russ turned to look at me, and his eyebrows went up over his beady little rat eyes. My skin felt as if it were trying to pull itself inside my body to get as far away from him as possible, and I wanted to pick up the nearest blunt object and chunk it at his fat, smirking, bearded face. Someday—I didn’t know when, but someday—that wasn’t gonna be just a wonderful fantasy. I was gonna do it for real.

“Well, if it ain’t little JoJo from next door,” he said. “Haven’t seen you around here in awhile. Looks like you ain’t quite so little anymore.” 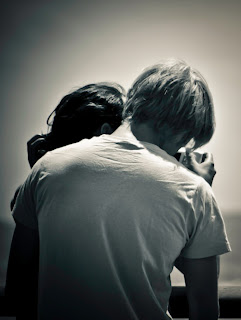 
~Stay true to yourself and your dreams will come true!
Posted by The Belle in Blue at 2:59 PM 4 comments: