Last few snippets from my MG novel, True Blue, the first book in my True Blue Trilogy. (You can catch up on the earlier excerpts here.) I chose this snippet for two reasons: to explain the significance of the stars on the cover, and to give you some perspective on the major change Wade will undergo between this book and the next one. This scene takes place the day of Jeana's 11th birthday party. Jeana had promised earlier to teach Wade the names of the constellations and tell him the myths behind them as soon as the fall games were over at the ball park behind both their houses. (The park lights would've made it impossible to see the stars.) Edited from the published version to fit our guidelines. 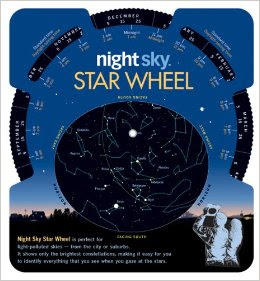 Later that night after supper, she was sitting in her porch swing, trying to decide which one of her new books to read first, when Wade came over holding a wrapped package.

“Oh, I forgot you said I'd get your present later,” Jeana said, her eyes shining in the porch light, “but why didn't you give it to me at the party?”

Wade sat beside her on the swing and said, “Because I wanna ask you something after you open it and didn't want Billy Joe to hear.”

That brought a little tingle to Jeana's spine as she carefully opened the gift that Wade had painstakingly wrapped in white paper on which he'd drawn books of different sizes. They were just crudely-drawn rectangles, and most of the titles were misspelled, but Jeana thought it was the best wrapping paper ever, and when she saw that the gift inside was a rotating star wheel that showed every constellation in the night sky and how to locate them, she gasped with delight.

"I thought you could use it when you show me the constellations, and since the ballgames are over at the park now, we can do it tonight if you want to.”

“Okay, sure,” she said, “but if you kept this for yourself, you wouldn't need me to show you anything.”

“Oh yes I would," he said, nodding for emphasis. “There's no way I can figure that thing out by myself, and you always explain stuff better than anybody, Redhot. Like I told you before, you should be a teacher when we grow up.”


I just realized I haven't shared any snippets from Jeana's POV yet, so I'll probably finish with one next week. I'll try to pick one that best shows why all these boys are in love with her at such a young age. Can't wait? You can buy True Blue here. ;-) And please do also check out the other Snippet Sunday folks and the Weekend Writing Warriors. Something for everyone among these talented writers!