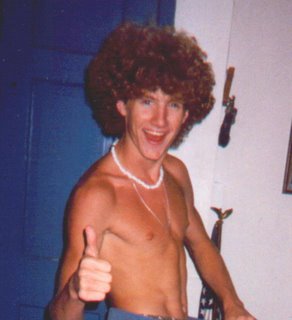 Whether published by a small independent press or one of the big guns, authors these days simply must help with the promotion of their books. This necessity has brought about the onset of a condition called “Promo Preoccupation” in which authors begin to see publicity opportunities in every situation. I know this condition exists because, unfortunately, I have been stricken with it myself.

I’ve extracted promises from my family that should I—God forbid—die accidentally or become the victim of a horrendous crime, they will capitalize on the subsequent news coverage and get exposure for my books. Hey, if I have to die a tragic death, the least they can do is sell some books from it.

I mean, come on. How hard would it be to slip a copy of my books into my dead hands and make sure the title is clearly visible for when the CSI photographers take their shots? Or, barring the opportunity for this, they could always just hold copies themselves while giving their grief-stricken interviews to the media about how they’ve merely lost a mother or wife, but the world has lost the female equivalent of Shakespeare.

Then there’s the advanced stage of the condition that causes the sufferer to invent ways for staging the kind of news stories that send the media into a feeding frenzy. You know, like hostage situations, kidnappings, children in wells, murder-suicides. Okay, strike that last one. Kinda hard to stage that.

For example, I have this great idea to get publicity for True Blue Forever. Since my 21-year-old son TJ is adorable and—more importantly—is a look-alike for Billy Joe, one of the most popular characters in the book, I could stage his kidnapping by a crazed Billy Joe fan! There would be a nationwide campaign to help me find my baby boy, with plenty of televised, tearful pleas by yours truly.

Joyce on the Today show with Matt Lauer-- "Oh, Matt. I'm just so distraught over the thought of my poor TJ being subjected to the amorous advances of a psychotic teenaged girl! If I'd known something like this would happen, I would never have written this Southern coming-of-age novel, (holds copy aloft for the camera) available from Authors Ink Books, Amazon.com, or through your favorite bookstore. Group discounts available to reading groups and search team volunteers. Matt, I just want my precious son back unharmed. Is that too much for a mother to ask?"

Then, just as the FBI converges on the remote cabin where TJ has been located, thanks to a clever message he manages to send via homing pigeon, the "culprit" escapes through the back door, never to be caught. TJ is found tied to a chair, covered with lipstick kisses and wearing a big smile.

It can't fail! TJ will become the next teen idol, he'll be a shoo-in for the role of Billy Joe in the True Blue Forever movie that Ron Howard directs and Madonna produces, (with "True Blue" as the theme song, of course) and my book will be off the charts in sales!

What? TJ doesn’t have a problem with it. And if I get caught, think of all the publicity opportunities during the arrest and trial!

~Stay true to yourself, and your dreams will come true. I don't know how I'm going to relate this entry to writing, but it had to be said.
I LOVE MICHAEL BUBLÉ!
No, not in a romantic sense, although he IS as cute as a baby's tushy. I love his showmanship, his sense of humor, his unpretentiousness, his appreciation for and recognition of the gifted musicians in his band, and his genuine love for the kind of music he has brought to a new generation of listeners.
But, most of all, I love his velvety voice that could make aboriginal war chants sound heavenly. The only song cover I've ever heard him do that I didn't like better than any other version is "Mack The Knife," and that's only because Bobby Darin's original is impossible to improve upon.
And the story behind Michael Bublé's (notice how I'm able to produce the properly accented "é" in his name. Not everyone can do that, you know!) musical career just makes him even more lovable. He was introduced to the old standards he came to love by his grandfather, who used to do free plumbing work for Vancouver musicians in exchange for their letting Michael perform a few numbers with them onstage, since Michael was too young to be booked in clubs at the time. In 2004, Michael took his grandfather on tour with him in Italy, and he dedicates "You'll Never Know" to his granddad when he sings it in concert. How can you not love a guy who loves his granddad?
I was fortunate enough to see Michael in concert last July, (I have the BEST sister in the world who treated me!) and it was an incredible show in every aspect. He's funny, self-deprecating, gracious, and he can sing any kind of music imaginable. He does a dead-on impression of Michael Jackson (including some enjoyable crotch grabbing!) and when he mocks Josh Groban (one of his best friends), it's hilarious.
If you've never heard Michael Bublé sing or have only heard his released singles ("Home," "Save the Last Dance For Me" and "Feeling Good"), then do yourself a favor and put his IT'S TIME CD on your Christmas list and put some asterisks and exclamation points beside it so Santa gets the message.

Hey, asterisks and exclamations points have to do with writing. Success!
~Stay true to yourself, and your dreams will come true.

P.S. If you go to Michael's website (http://www.michaelbuble.com) you automatically get to hear three of his songs!
Posted by The Belle in Blue at 12:10 PM 1 comment: